Learning and honing a magic trick or effect is a journey. You read the instructions and try it out with someone and then someone else and another person and you start to learn what works and what doesn’t work for both you and your audience. What are those touches that you can add that will make it more mysterious or amusing or entertaining? When I teach my 5th grade students a trick I am very clear about how I’d like it to be done. But sometimes the way I perform it won’t work for them so we brainstorm different approaches and methods. And once they perfect it I then tell them to do it entirely their own way, to personalize their “patter” or stories, to try something new with the same props. And they come up with so many great ideas that I will often borrow them and use them in my own performances!

Magic Teaches the Importance of Practice, Grit, and Perseverance

Learning magic can be really difficult. Some magic tricks or routines involve multiple steps and a combination of many different “moves” or techniques. With those tricks your child needs to practice, practice, and practice some more. They should perform in front of a mirror so that they can see it from the audience’s perspective. They should perform it for family and close friends to test it out. They should put it away for a bit, take a break, and come back to it if they are feeling frustrated. Sometimes, particularly earlier in the learning and performance process, they may mess up, which can be awkward or embarrassing. If that’s the case they need to practice some more and perform it as soon as possible! Your children will learn from their failures as well as successes. When discussing this with my magic students I talk about my own magical mishaps and what I did to move past them in the moment and afterward. I also discuss with them the effects that took me months and months to learn, despite my level of experience.

Magic is a Lifetime Skill and Hobby

People can perform magic well into their later years, and the same cannot be said for all skills and hobbies. When I first started teaching at St. Stephen’s and St. Agnes, I heard that a grandfather of one of our students was a great magician. I invited him to speak to my middle school magic club. He came in with a small change purse and performed beautiful effects for almost 45 minutes just with the contents of that purse. He was in his early 90s and he performed a classic, very difficult trick called the Gypsy Thread in which the magician breaks a piece of thread into tiny pieces and then restores it right before your eyes. When I attend magic conventions I feel on the younger side, and I’m 49!

Magic Opens Up Other Realms of Experience and Learning

Magic is connected with other artistic realms like dance, movement, art, acting, comedy, and more. The history of magic is really the history of humanity, from ancient shamans to magicians of today. There are stories of magicians performing for the ancient pharaohs, and others using stagecraft and misdirection to help the allies during WWII. Magic is an important aspect of theater today as Mary Poppins flies across the stage or Aladdin's carpet does the same. I have recently become fascinated by the psychology and neuroscience of magic and have spoken about this in our AP Psychology class. Magicians have known intuitively for centuries what is now being studied and better understood by scientists about awareness and perception and how one makes sense of the world. 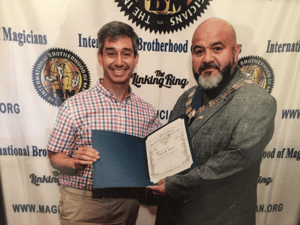 It’s a Great Time to Be a Magician

Magic’s Golden Age was from the 1880s to the 1930s. Illusionists from many different countries traveled the world drawing huge audiences who marveled at their skill and showmanship and their grand effects that had never been seen before. Magicians levitated people and cut them in half (and restored them!) and walked through walls and vanished from onstage only to appear from the back of the theater. Houdini escaped from jail cells and trunks and straight jackets and more. Today we are in another golden age. Magic is part of popular culture as it’s in movies and TV shows and commercials. Two magicians have won America’s Got Talent. Shows like The Illusionists are touring the country and the world and selling out in each city they visit. Las Vegas is brimming with magic shows of all kinds. If your child gets into magic, he or she will be doing so at a very exciting time!