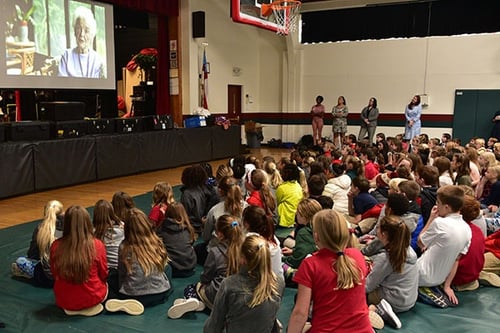 Making the jump from the Lower School to the Middle School as easy as possible is a priority in our community. Since 2016, every fifth and sixth grade Saints class has met on the Middle School campus to participate in a service project that gives back to our local community and strengthens the bonds between our campuses.

On Monday, the tradition continued. Students reprised the 2016 project of hand-designing more than 150 placemats for distribution to area seniors served by Meals on Wheels.

Tanya Edwards, the local Coordinator for the Meals on Wheels, spoke with students at the start of the event about their contributions to the community.  “For dozens of seniors, their Meals on Wheels delivery is the only interaction with another person all day long. We take that responsibility seriously and try to forge connections. This project helps to show them that they are an important and unforgotten part of our community. Your work is going to be a reminder of that, and I know how much it will mean when we deliver them.” 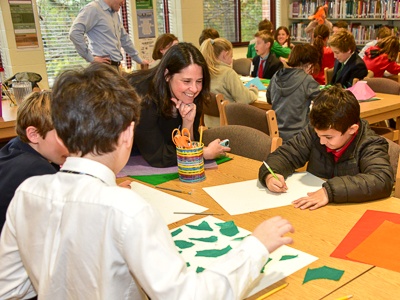 Giving fifth graders the opportunity to visit the Middle School campus, meet the sixth grade faculty and set themselves up to find a familiar face in the halls when they change campuses in the fall has been a positive experience that can ease anxieties, but they aren’t the only ones benefitting from the day.

Our sixth graders make the event the success that it is by making their fellow Saints feel welcomed and comfortable on the middle school campus. They showed their ability to lead, too, which isn’t a role typically played by the youngest students at the middle school, and the impact they had was immediate.

“This was a lot of fun and I was looking forward to it for a while,” said fifth grader Madelyn Byrne. “My brother did it last year. I liked hearing from the person at Meals on Wheels and getting to be at the Middle School. I’m glad I got to do this. It just made me feel good and I hope it makes them smile.”

I’m looking forward to seeing Madelyn and all of the other fifth graders on campus next year — and helping them to lead the next group that will follow in their footsteps.